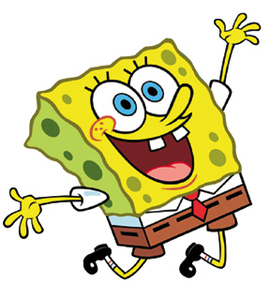 Ah, Spongebob, the sponge who lives in a pineapple!! The main character in Spongebob Squarepants! The optimistic, fun loving sponge who is a fry cook at the Krusty Krab. His favorite food is the Krabby Patty, of course, and his hobbies include Jellyfishing, Karate and Bubbleblowing. He also likes playing with his best friend and neighbor Patrick Star, and is also friends with Sandy Cheeks and could be considered friends with his boss, Mr. Krabs. He considers himself friends with Squidward Tentacles, but Squidward hates Spongebob, and often tells him that. He constantly takes classes at Mrs. Puffs Boating School, but can never get his license because of his awful driving habits! :(. Oh, and he has a pet snail named Gary, and his favorite TV show is Mermaid Man and Barnacle Boy, who are also his favorite superheros.

Good ol' Patrick Star! He's Spongebob's best friend and lives two houses down from him, under a rock  on the other side of Squidward's house. He enjoys much of the same things as Spongebob, but he doesn't have a job, have a pet or take boating lessons. He also gets on Squidward's nerves a lot too, but not as much as Spongebob. He's kind of dumb but sometimes says randomly smart things. And he's so cute!

Oh Mr. Krabs! Mr. Krabs is Spongebob's money-obsessed boss and the owner of the Krusty Krabs. He is very cheap and hardly spends any money. He hardly even spends any money on his own whale daughter, Pearl. For example, once he threw her a party will a banner from when she was born and gave her guests water, crackers, and ketchup packets as snacks! His worst enemy is Plankton, who always trys to steal the Krabby Patty Secret Formula to use in his own failure of a resturant, The Chum Bucket. He usually doesn't date, but once went out with Spongebob's boating instucter, Mrs. Puff. 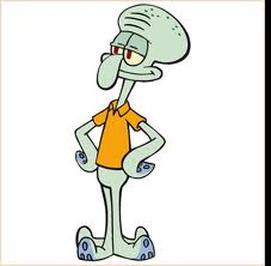 *Sigh* Grumpy Squidward. He lives next door to Spongebob and really hates him and Patrick. He likes to play the clarinet and thinks hes rather good, but nobody agrees with him. He also enojoys painting and has quite a large collection of self-portraits. One of his worst enemies is Squilliam Fancyson, who is a rich musical genius. Him and Squidward met in high school, when Squilliam claims Squidward was voted "Most likely to Suck Eggs!" Squidward also works at the Krusty Krab as a cashier, however his attitude is not up to par and he often sleeps on the job.

Sandy Cheeks, the squirrel who lives underwater! Sandy, who's from Texas, is one of Spongebob's best friends. They both share a love of karate. Sandy is very adventurous and fun loving, but she's also smart. She has a lot of science awards, is often making inventions, and is very knowledgable about science. She lives in a tree dome that has air and lets her breathe without her having wearing a spacesuit like thing that allows her to breathe, which is what she wears when she goes out. 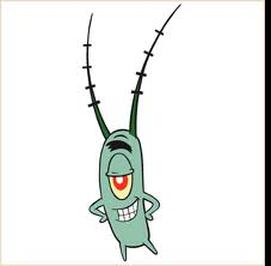 Hmm. Sheldon Plankton, who's usually just called Plankton. He is the owner of the failed resturant the Chum Bucket, so he always tries to steal the Krabby Patty Secret Formula in order to make his resturant successful. However, he always fails regardless of what invention, scheme, or plan he makes. His computer wife, Karen, sometimes tries to help but he often ignores her. Sometimes he comes close to succeeding but never does. Once, he made an underground resturant called the Chum Caverns that was successful only because of it's beauty, and not because of the horrible chum he served. Unfortuneatly (for him, at least) that failed to when it caved in. 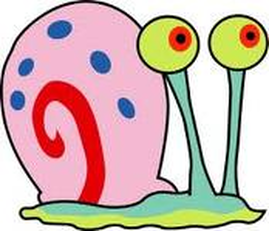 Loyal Gary the snail is Spongebob's pet. He meows like a cat, instead of normal snail sounds... do real life snails make any noise? Anyway, he doesn't like taking baths, as seen in a couple episodes, and seems very intelligent. Also, the inside of his shell has been shown to be many things. For example, when Spongebob was obsessed with the song "Musical Doodle," it was a record player.

Ah, it's Spongebob's boating school teacher, Mrs. Puff. As you can probably tell, Mrs. Puff runs Mrs. Puff's Boating School. Although she isn't a bad teacher, there is one student she can never teach- Spongebob. It isn't her fault, though, because even the best boating school teacher couldn't teach Spongebob. Mrs. Puff doesn't like Spongebob either, she finds him annoying and she's had him as a student for years. Even though her name is Mrs. Puff, she is not married. Once, she even dated Mr. Krabs. Mrs. Puff has also gone to jail a few times. 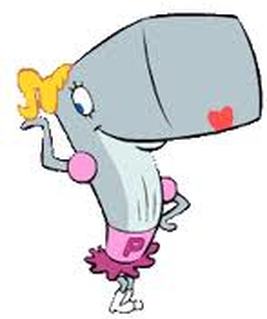 Yay! Mr. Krabs' daughter! Don't ask me how he got a whale for a daughter. Probably her mother was a whale, greedy Mr. Krabs would never willingly adopt, and he says he had a banner from the day she was born. Anyway, Pearl doesn't like her father much. He's too overprotective- of his money! Although he's rich, Mr. Krabs hardly spends any money on his daughter. If you read the thing on Mr. Krabs, you'd she that once on her birthday he threw he a party with crackers, water, and ketchup packets as refreshments, but then she threw her own party with his money. Pearl also doesn't like Spongebob much, and she like to go to the mall with her friends. 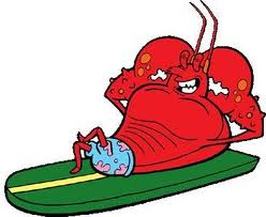 Larry is a relatively minor character in the series. He works at Goo Lagoon as a lifeguard, even though Bikini Bottom is underwater already, and all the creatures breathe water. He is very strong and often works out. He is good friends with Sandy Cheeks. 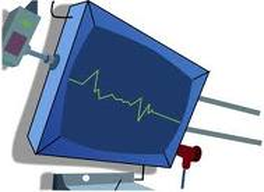 Karen is Plankton's computer wife. She is usually on the wall in Plankton's lab, but is also seen through a portable screen. She has the emotions of a real person. For example, once she cried when Plankton told her that W.I.F.E. only stands for Wired Intergrated Female Electroencephalograph. Also, she made fun of Plankton's first name, Sheldon, when all his relatives came to try and help him steal the Krabby Patty secret formula. 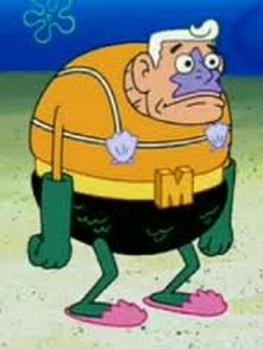 Mermaid Man is a superhero. Barnacle Boy is his sidekick. He stars in the show within a show, "The Adventures of Mermaid Man and Barnacle Boy" with Barnacle Boy. However he is a real superhero and he now lives in the Shady Shoals Rest Home. His powers include (but are not limited to) one that lets him control creatures of the sea. Him and Barnacle Boy's secret headquarters is the Mermalair and they get around in the Invisible Boat-Mobile. He freaks out whenever someone mentions the word "Evil." For more of his powers go here. 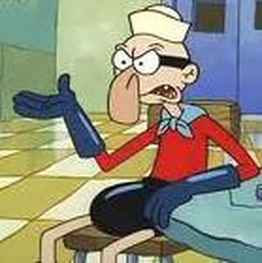 Barnacle Boy is one of Spongebob and Patrick's favorite superheros. He is Mermaid Man's sidekick and his main superpower is sulfer vision, a form of heat vision. He is now a senior citizen and lives in a nursing home with Mermaid Man. He doesn't like Spongebob and Patrick much, he is almost like Squidward. Once, when Mermaid Man ordered him a Pipsqueak Patty at the Krusty Krab, he temporarily joined forces with the Dirty Bubble and Man Ray because Mermaid Man always treated him like a baby even though he's really old. Together they founded an organization called E.V.I.L., or Every Villian Is Lemons. However, when E.V.I.L. defeated Mermaid Man and the main characters dressed up as superheros, Barnacle Man as he wanted to be called, joined back up with Mermaid Man under the conditions that he was treated like an adult, got a normal sized Krabby Patty, and something else along those lines. He stars in the show within a show "The Adventures of Mermaid Man and Barnacle Boy." 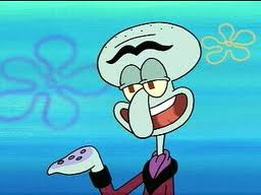 Squilliam is Squidward's high school rival. He's also a rich musical genius with a unibrow. Although Squilliam claims that Squidward was voted "Most Likely To Suck Eggs" in high school, Squidward always try to impress him. Once Squidward redecorated the entire Krusty Krab to look like a fancy resturant so Squilliam wouldn't know he was just a cashier. Squidward also impersonated Squilliam once so that he could have his own music class. 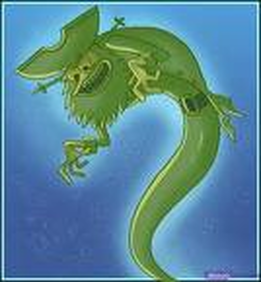 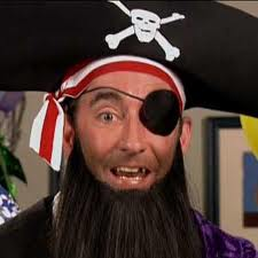 Patchy the Pirate is Spongebob's self-proclaimed Number 1 fan. He has Spongebob everything, even underwear. He appears in Spongebob specials, big events, or movies. Potty is his talking pet parrot, and they often don't agree on things. He also made an appearence in Big Time Rush Beach Party hunting for treasure. 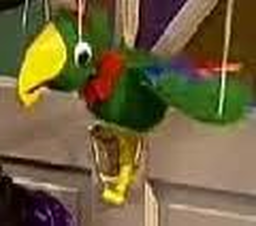 Potty the Parrot is a puppet who is Patchy the Pirate's pet. He is in every episode that Patchy is in. He always give Patchy a lot of sass and acts annoying, but they always make up at the end of an episode. 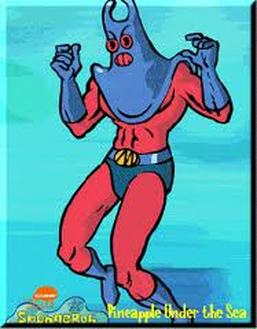 Man Ray is an evil villian who briefly worked with the Dirty Bubble and Barnacle Boy to form an organization called E.V.I.L. (Every Villian Is Lemons).  He was one of Mermaid Man and Barnacle Boy's worst archenemies. However, he ended up giving up his evil ways for good. In the episode where Spongebob and Patrick dressed up and Mermaid Man and Barnacle Boy to go to a competition but ended up wrongly arrested all of Bikini Bottom, they saw Man Ray at the laundromat. He saw his high school prom date, Mable, and started a conversation when Spongebob and Patrick saw them. Thinking the two were plotting an evil scheme together, they attacked and arrested them. However, they were really completely innocent. 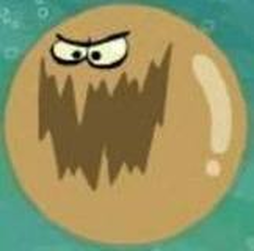 Dirty Bubble is one of Mermaid Man and Barnacle Boy's worst enemies.. He is a champion at paddle ball. 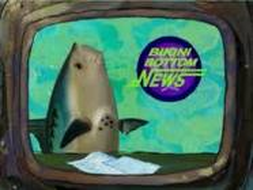 Not much is known about Johnny. His name was revealed in the video game "Battle for Bikini Bottom." He is the news anchorman for the Bikini Bottom News, but he's also an announcer at other events. He was the announcer at the 21st Fry Cook Games and was also the narrator of the King of Karate video in the episode "Karate Island."